Tokyo is a blending of old and new, traditional and modern, history and progress, and culture and innovation. It’s amazing how these seemingly opposite poles work well together, creating a plethora of attractions for locals and tourists to explore and enjoy. Here are some of the popular tourist spots.

Note: A one-day pass allows you to access either Tokyo Disneyland or Tokyo DisneySea. You can also purchase a multi-day pass if you plan to explore both theme parks. 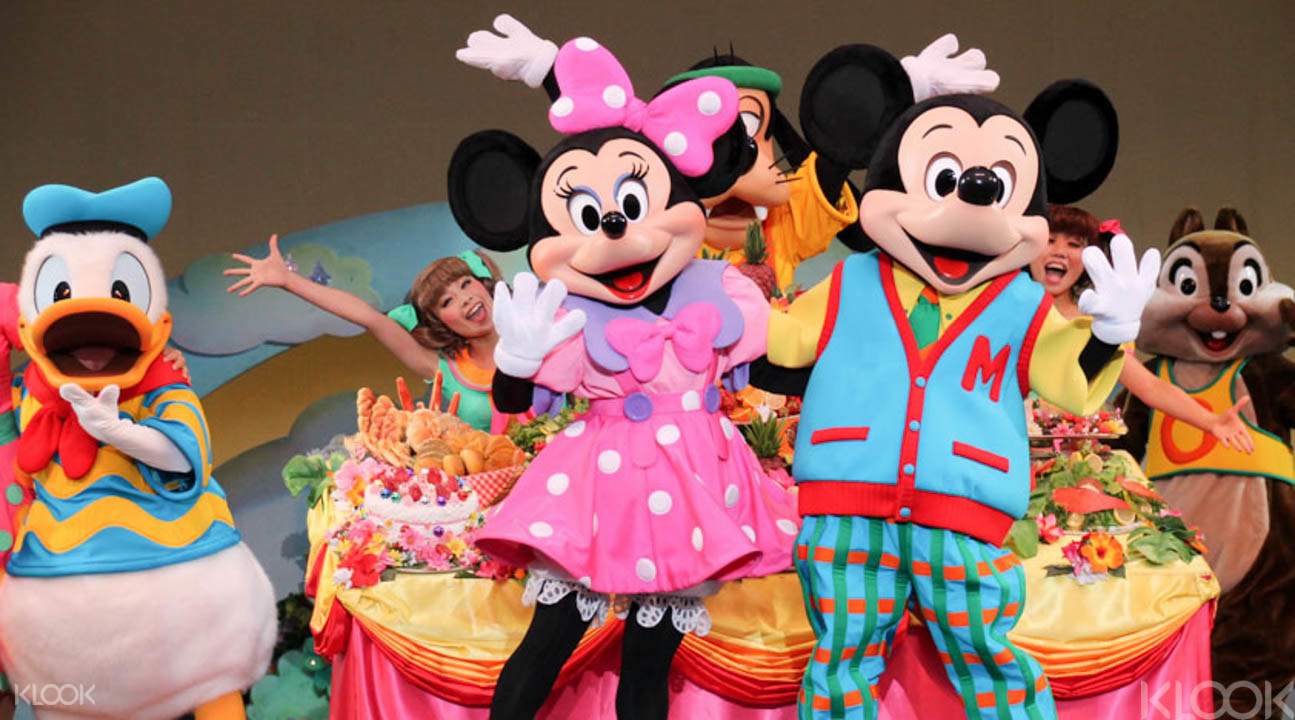 Skip the lines and save more time when you buy your ticket online. You just have to print your voucher and proceed to the entrance gates.

At 634 meters, Tokyo Sky Tree towers over Tokyo Skytree Town in Sumida City Ward. It is one of the tallest structure in the world and currently the tallest in Japan, surpassing the record of Tokyo Tower. The tower has two observation decks, providing a panoramic view of the metropolis. The place is usually crowded, so you need to be early to secure or reserve your slot. You can find the entrance and the ticket counter for the first observatory on the 4th floor. 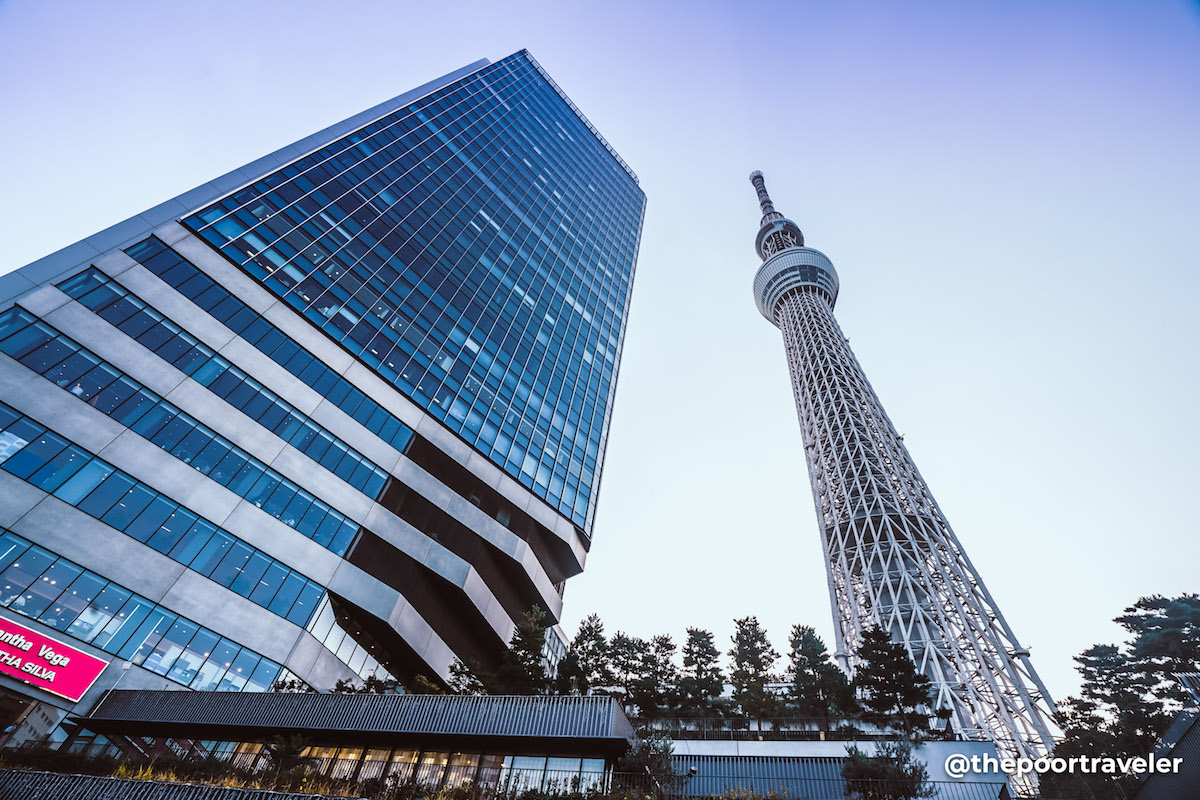 Skip the lines and reserve your spot online. You just have to print your voucher and proceed to the entrance gates.

If you want something different, you try going to Robot Restaurant where you can be entertained by lively robot shows and futuristic displays. Get ¥500 drink coupon and free photo ops with the robots when you book the first performance on a Saturday or Sunday. 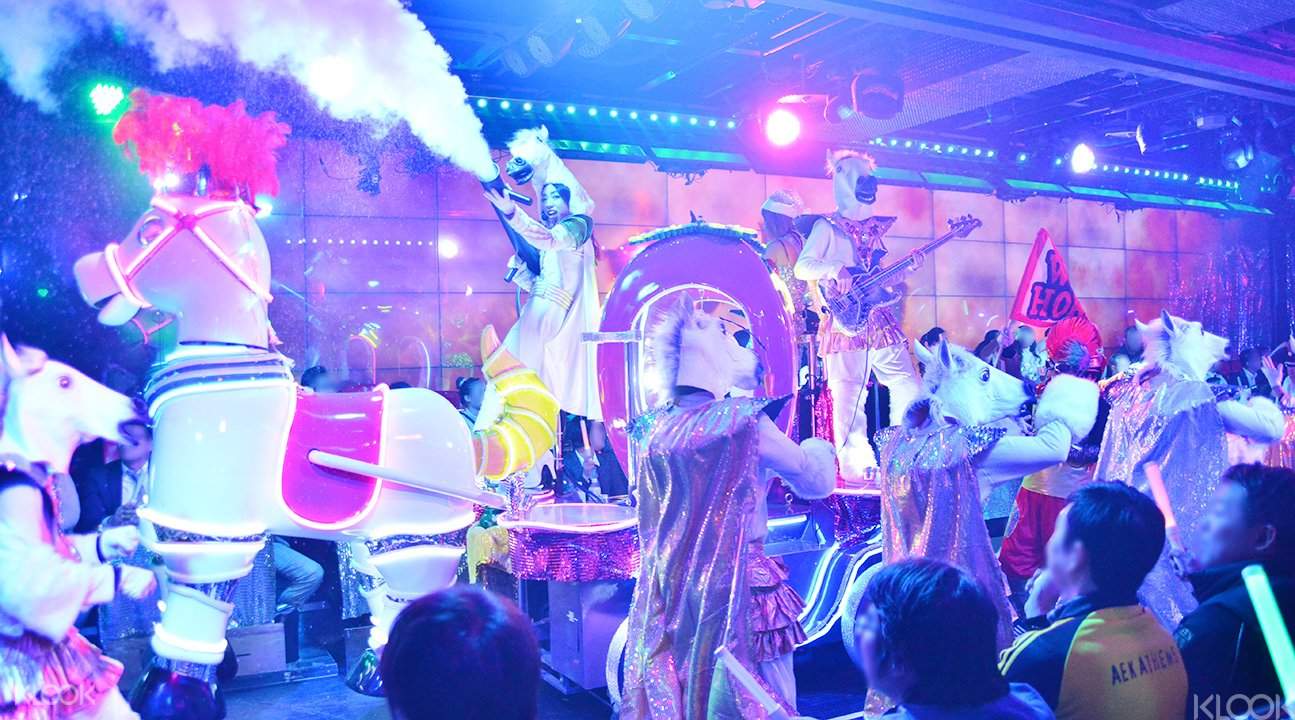 For convenience, you can join a group tour and also get a discount by reserving your slot online.

Akihabara (or Akiba) is originally known for its numerous electronics stores and the wide array of electronic gadgets and products – either new or pre-owned. The district also attracts patrons of the anime and manga world. The otaku culture is very much alive here. In fact, a lot of establishments and shops have embraced the culture, selling manga and anime-related goods and wares. There are several quirky-themed shops too, fashioned after anime or manga. 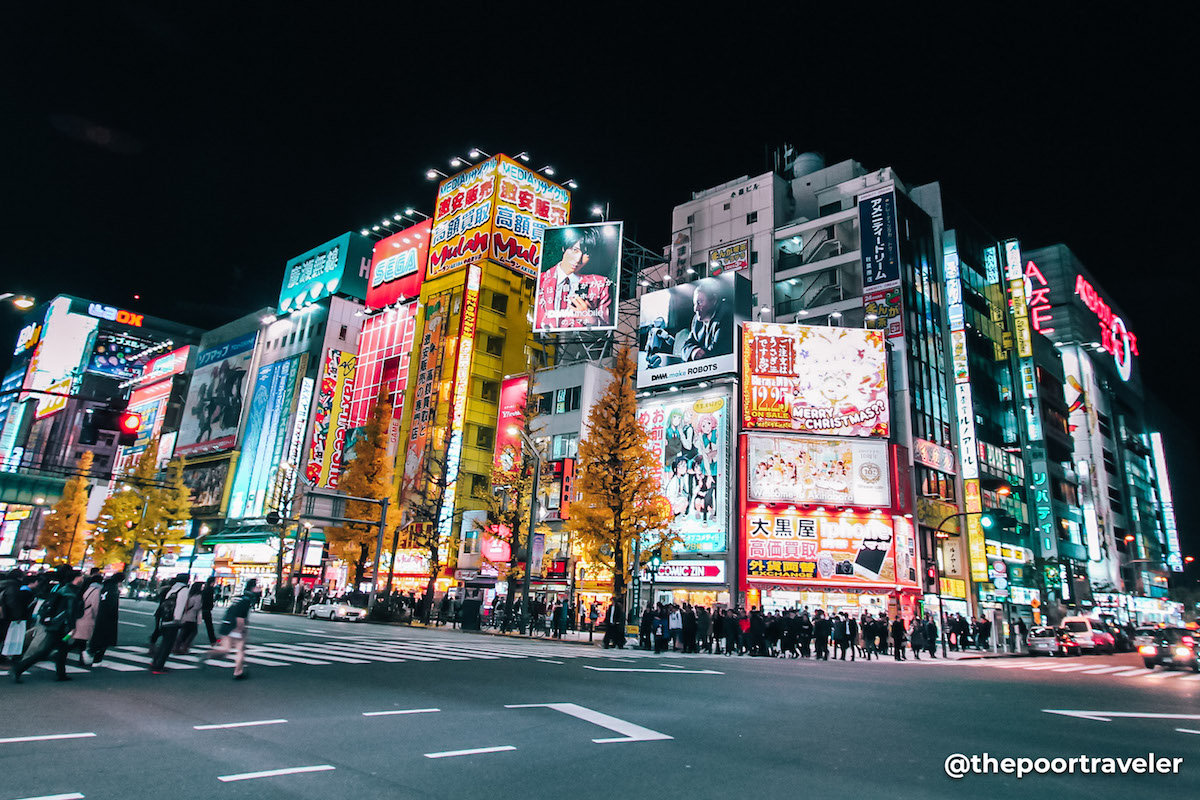 Admission Fee: FREE
Opening Hours: 24 hrs; it depends on the establishment
Getting There: From Tokyo Station, take either JR Yamanote Line or JR Keihin Tohoku Line to Akihabara Station.

Built on the same site of the former Edo Castle in the center of Tokyo, the Imperial Palace is the residence of the Imperial Family to this day. The original palace was destroyed during WWII but was reconstructed, following the design of the former palace. The rebuilding was completed in 1888. The inner grounds are not open to the public except on December 23 (Emperor’s birthday) and January 2 (New Year’s greeting) where the Imperial Family greets the people from the balcony. 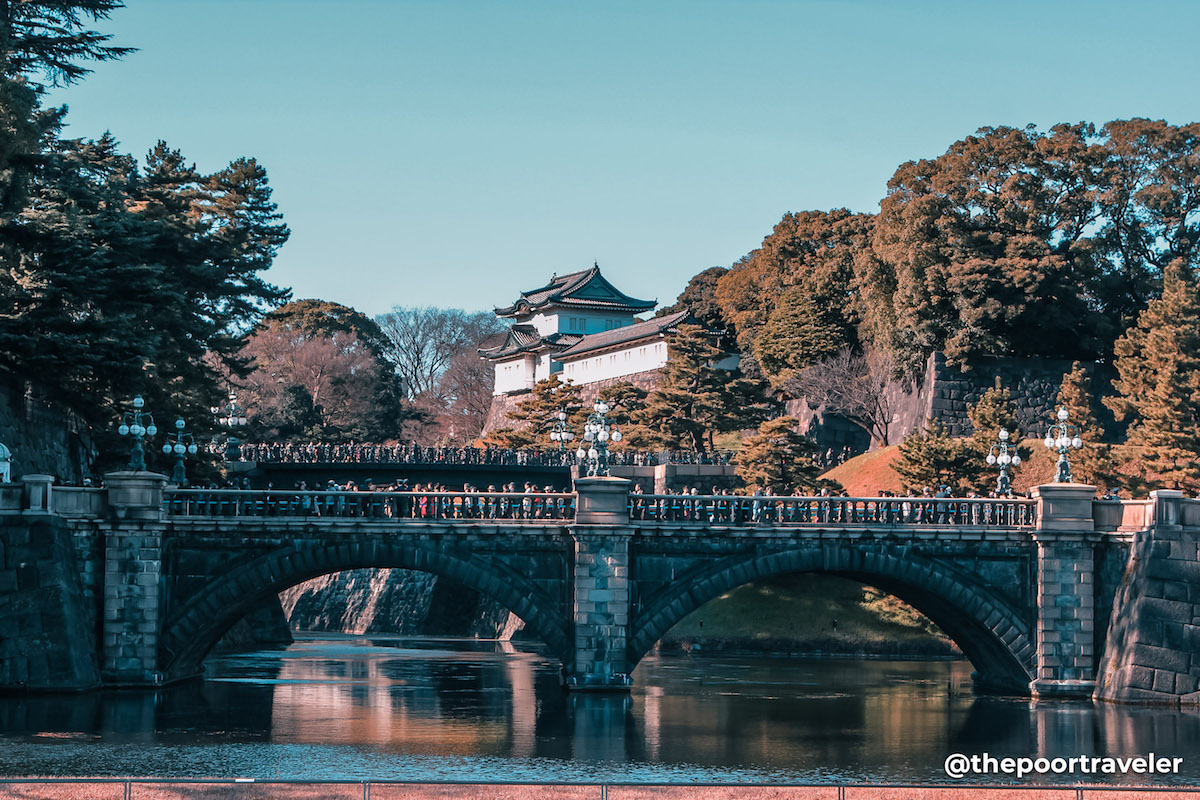 Admission Fee: FREE
Note: You have to join a group tour to be able to access some of the areas. It’s free.
Opening Hours: 09:00 AM – 05:00 PM; 10:00 AM and 01:00 PM (group tour schedule, except Sundays and Mondays)
Getting There: From Tokyo Station, take the Marunouchi Central Exit. It will take you about 10 minutes on foot to reach the Imperial Palace.

Built in 645, Senso-ji is Tokyo’s oldest temple. It is a Buddhist temple originally built to honor Kannon, the goddess of mercy. Not only is the temple historic but also its shopping street, called Nakamise, running from the first gate (Kaminarimon) to the second (Hozomon). 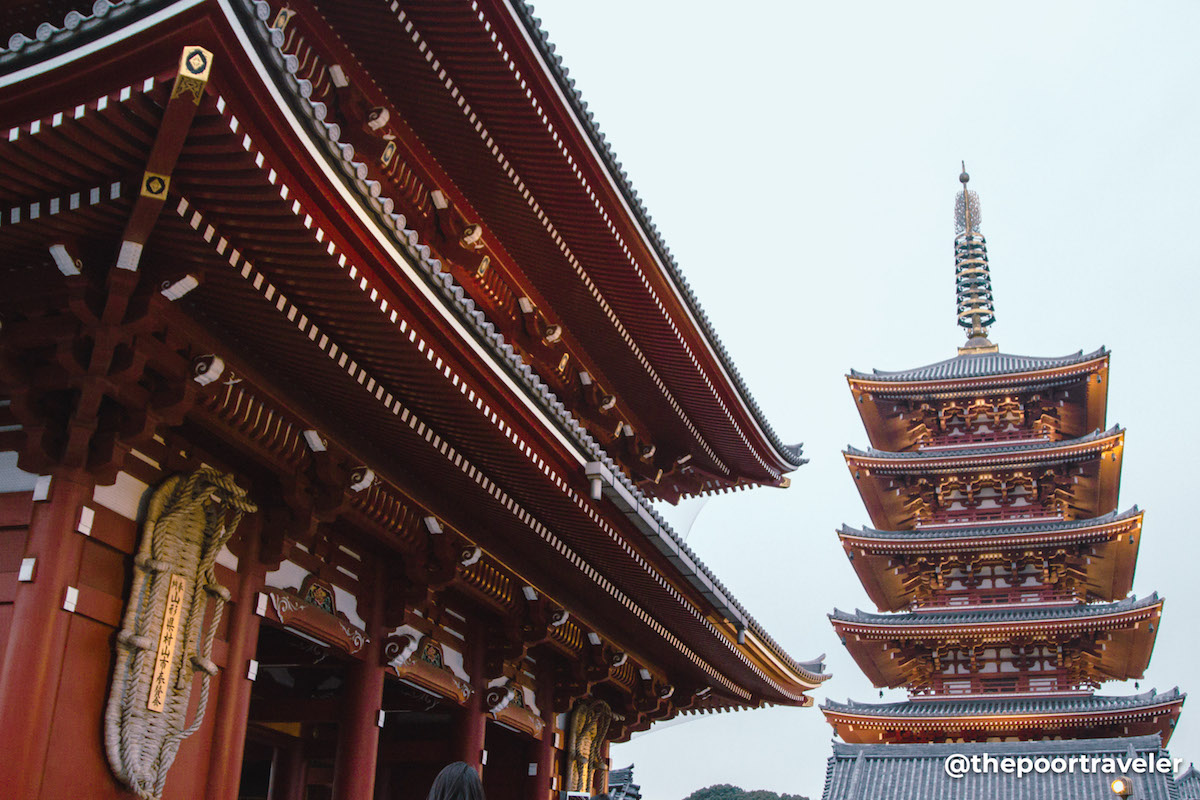 Admission Fee: FREE
Opening Hours: 06:00 AM – 5:00 PM (06:30 AM from October to March)
Getting There: From Tokyo Station, alight at Kanda Station via JR Yamanote Line. Transfer to the Ginza Subway Line and take the subway to Asakusa Station.

The public park is one of Tokyo’s most popular spots for cherry blossoms viewing, boasting 1000 cherry trees lining its main pathway. It is also famous for the museums and temples nestled on its ground including the Tokyo National Museum, the National Science Museum, the National Museum of Western Art, the Tokyo Metropolitan Art Museum, Kaneiji Temple, and Kiyomizu Kannon Temple. 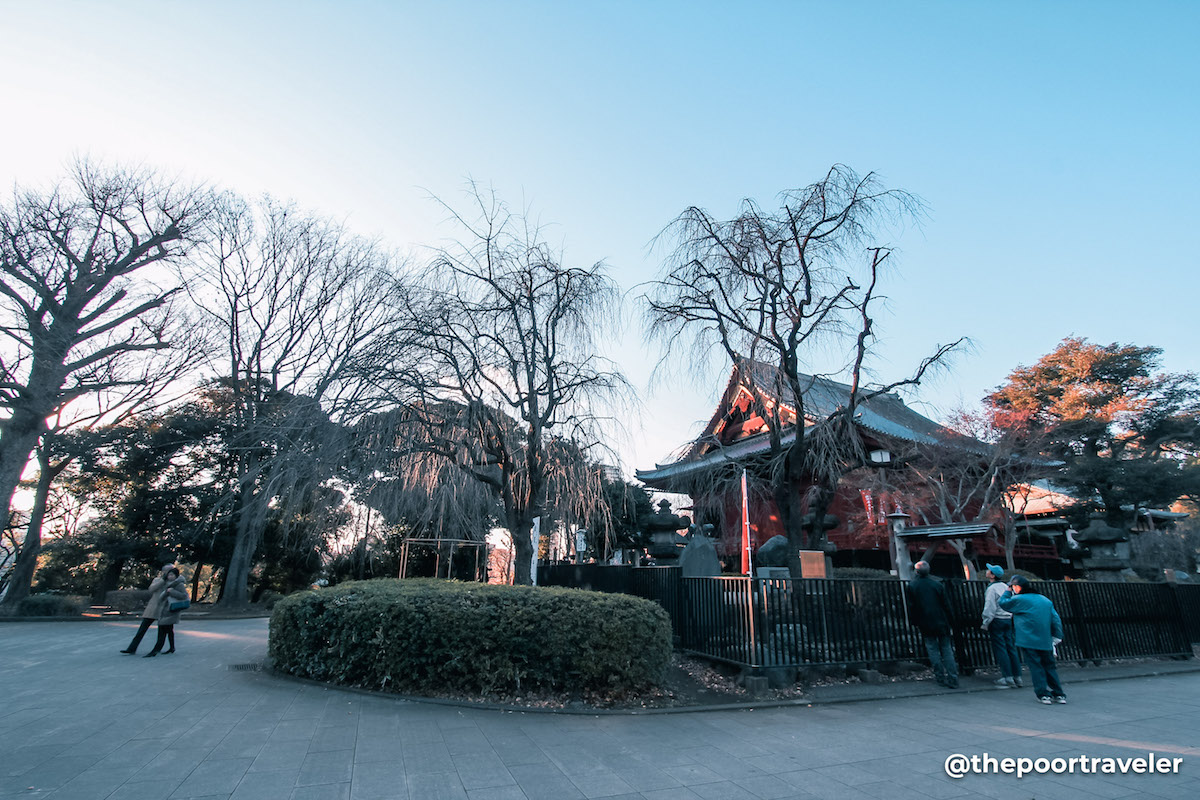 A massive torii gate will greet you at the entrance of this Shinto shrine built in memory of Emperor Meiji and Empress Shoken. The shrine is one of the most visited shrines in the country. The grounds are perfect for a relaxing stroll with its scenic walkways and lush surroundings. 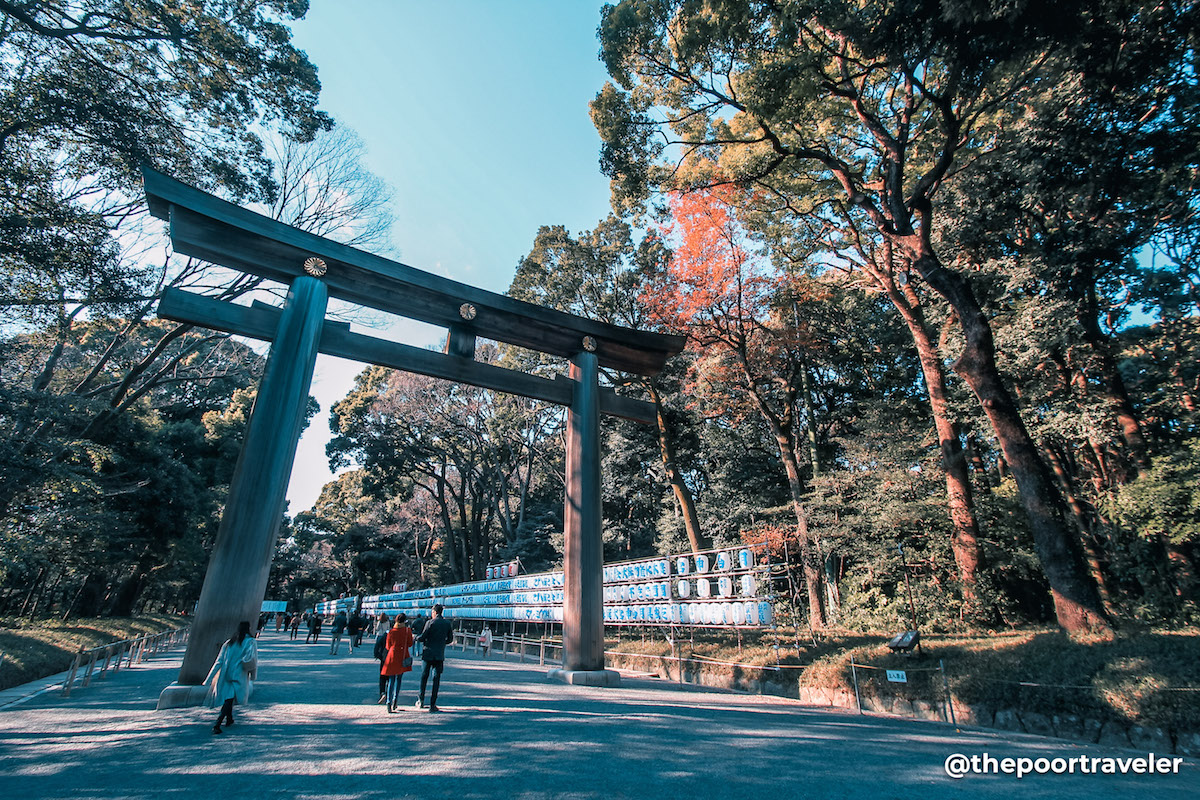 Harajuku’s most famous street, the Takeshita-dori, is the nucleus of Tokyo’s youth culture and fashion. The youth culture is reflected by the colorful and eccentric vibe of the place through its food stalls and restaurants, trendy shops, and fashion-forward boutiques. 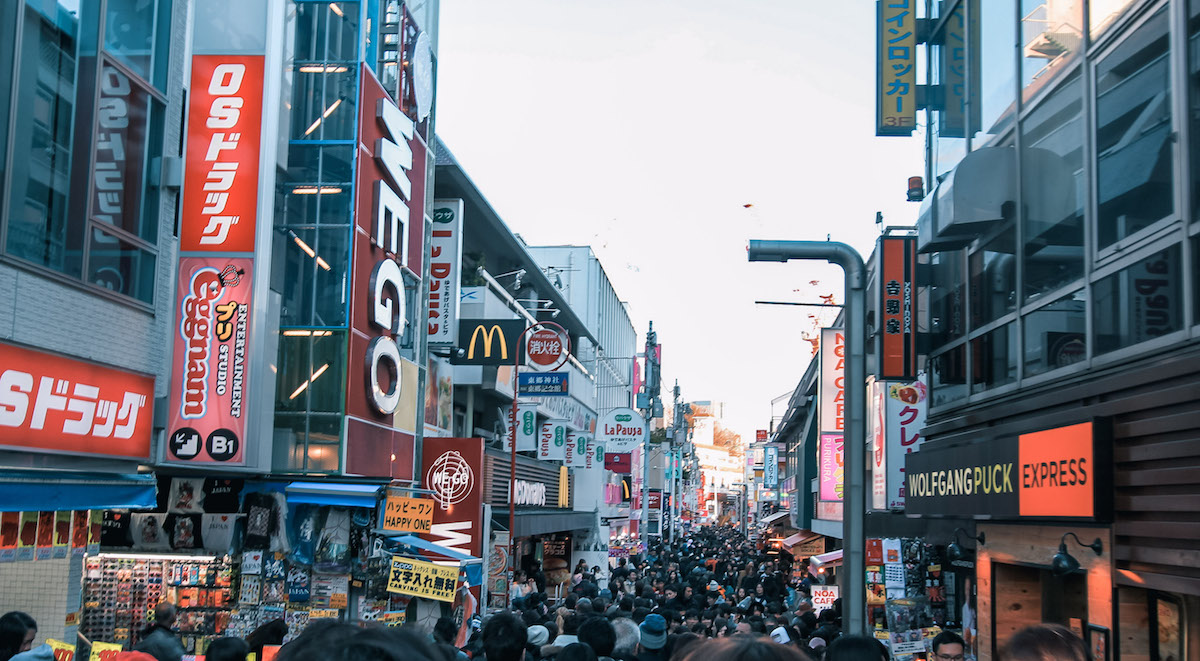 Admission Fee: FREE
Opening Hours: 24 hrs; it depends on the establishment
Getting There: Alight at Harajuku Station via JR Yamanote Line.

Often coined by many as the world’s busiest intersection, Shibuya crossing is like the nervous system of the whole Shibuya Ward. The crossing is surrounded by establishments with large flashing screens and advertisements. Take photos with the famous Hachiko Statue in front of Shibuya Station. Go shopping or just sip a drink while watching the people do their magic when the pedestrian light turns green. 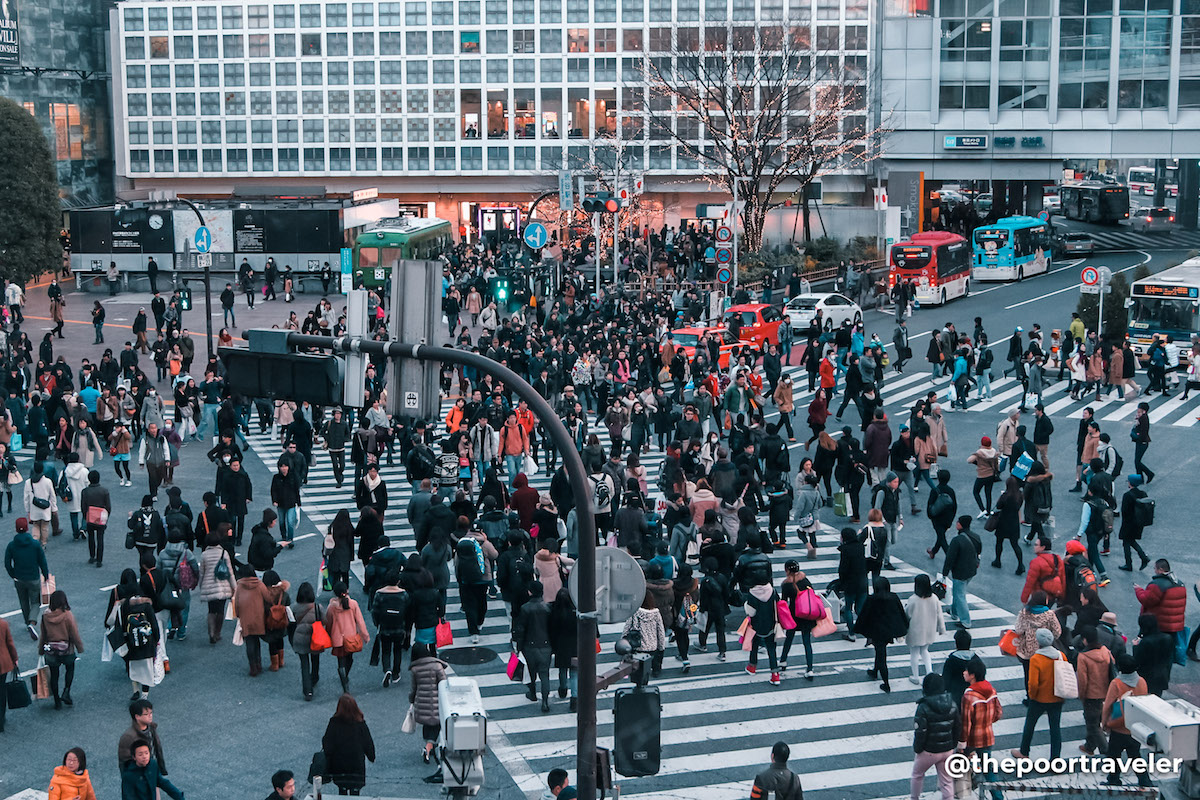 Admission Fee: FREE
Opening Hours: 24 hrs
Getting There: Alight at Shibuya Station via JR Yamanote Line or any of the several railway lines serving the station. Take the Hachiko Exit.

Located next to Meiji Shrine and Harajuku Station, this large city park is very accessible to the public. The park might not have as many cheery trees as the other parks and sites, but it is still a good cherry blossom spot during spring. More than the cherry blossom, Yoyogi Park attracts visitors in autumn when its gingko tree forest turns vibrant yellow. 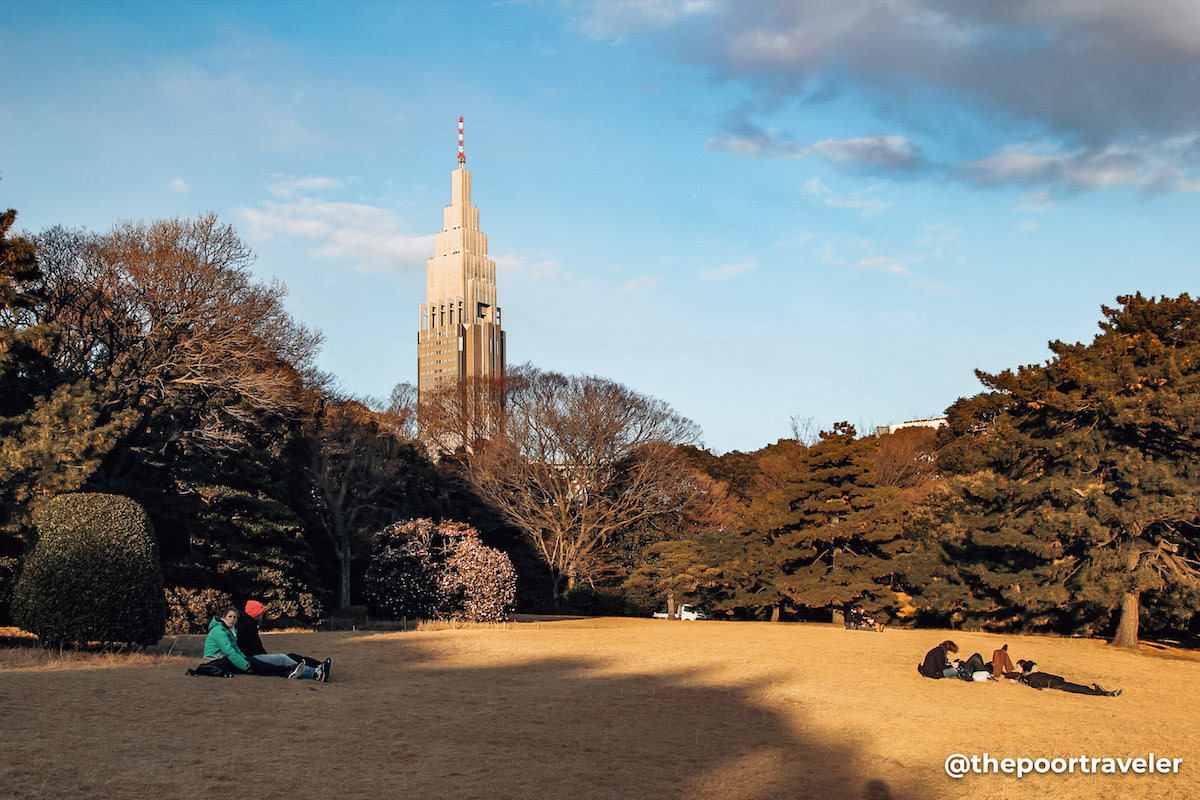 Admission Fee: FREE
Opening Hours: 24 hours
Getting There: Alight at Harajuku Station via the JR Yamanote Line. Take a short walk to the park.

Located in Tokyo Bay, it is composed of man-made islands which developed from originally being a defense strategy during the Edo Period to being a key business district in Tokyo. It boasts modern architectural structures and green spaces. Green spaces, roads, and walkways are proof of modern urban planning. Some of the notable attractions are Fuji TV Building, Leisureland, Palette Town, and the view of the Rainbow Bridge. Shop at DiverCity Tokyo Plaza and AquaCity. 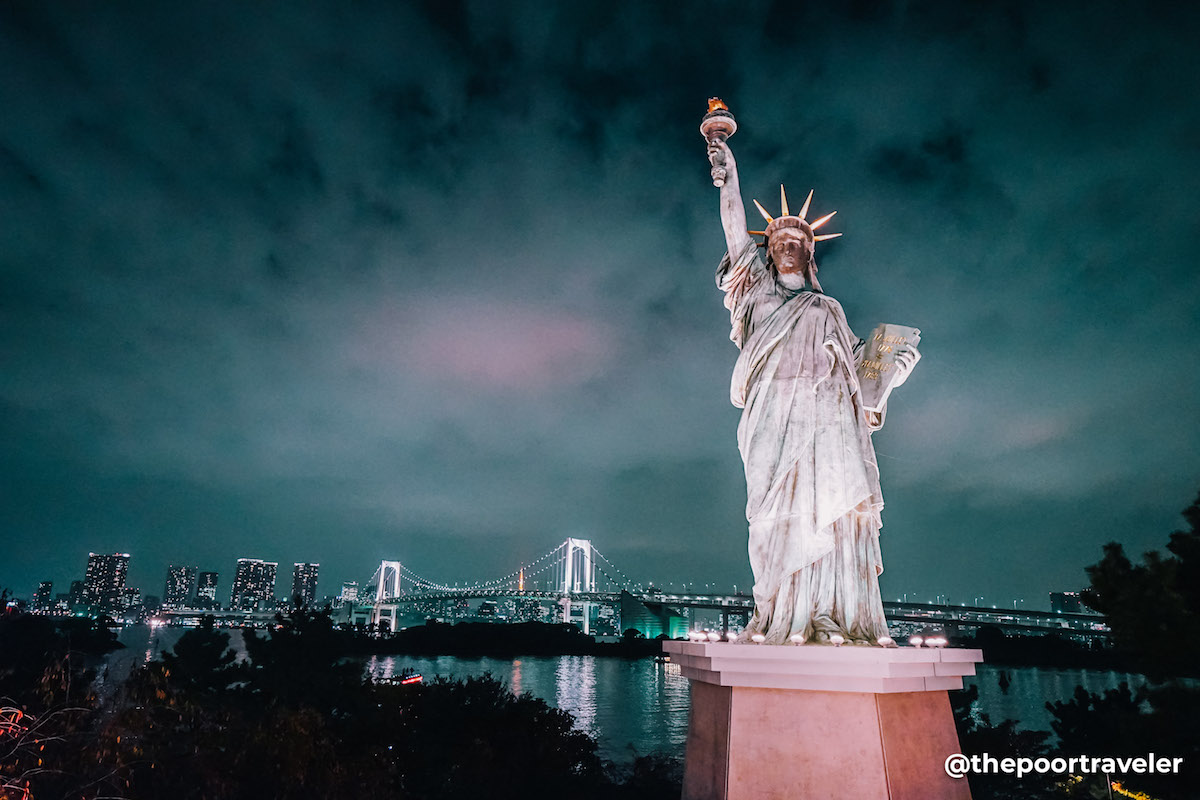 Admission Fee: FREE
Opening Hours: 24 hrs; it depends on the establishment
Getting There: Alight at Shimbashi Station via JR Yamanote Line. Take the Yurikamome to Daiba Station.

Launched in 1958 and inspired by the Eiffel Tower, it used to hold the record of the tallest structure in Japan until 2012 when Tokyo Skytree finished its construction. At 150 meters, its main deck provides a fascinating view of the cityscape. 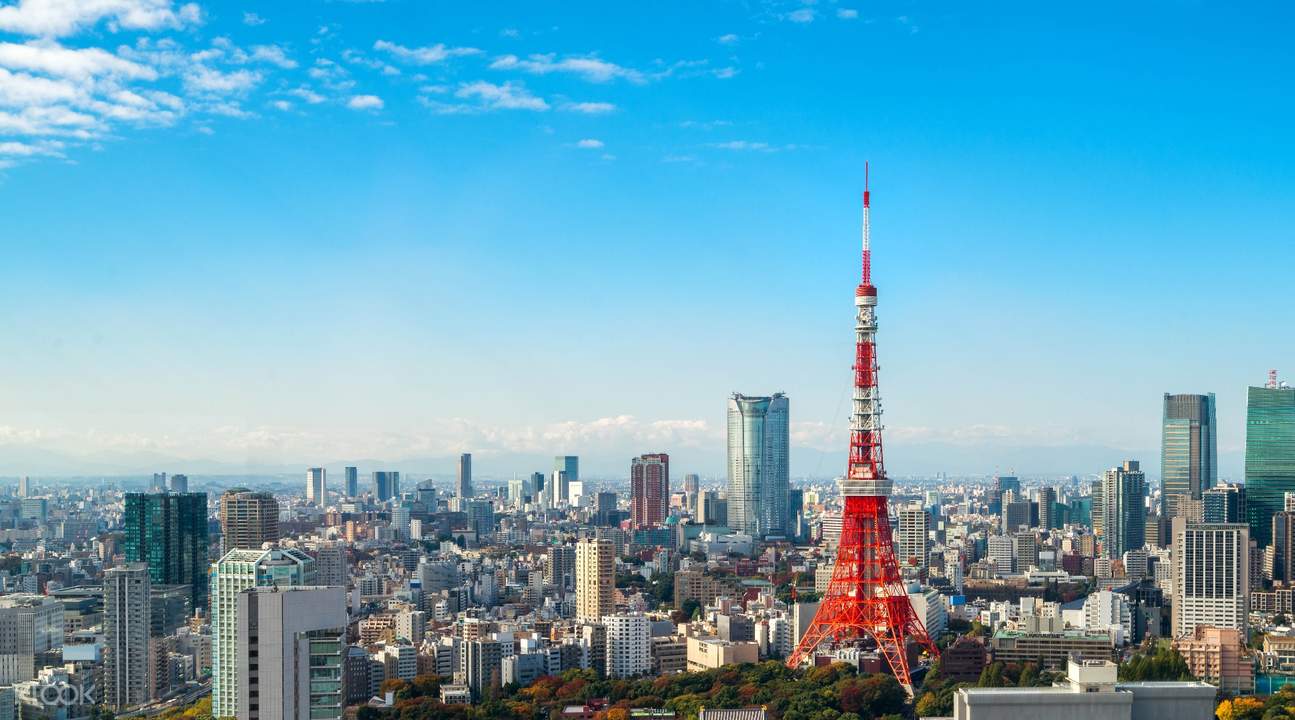 Admission Fee: ¥900 (main deck only); ¥2,800 (both decks)
Opening Hours: 09:00 AM – 11:00 PM (daily)
Getting There: Alight at Hamamasutcho Station via JR Yamanote Line. It will take you about 15 minutes to reach the tower on foot. Alternatively, you can alight at Akabanebashi Station via the Oedo Subway Line and take a five to ten-minute walk from there to the tower.

Skip the lines and reserve your spot online. You just have to print your voucher and proceed to the entrance gates. 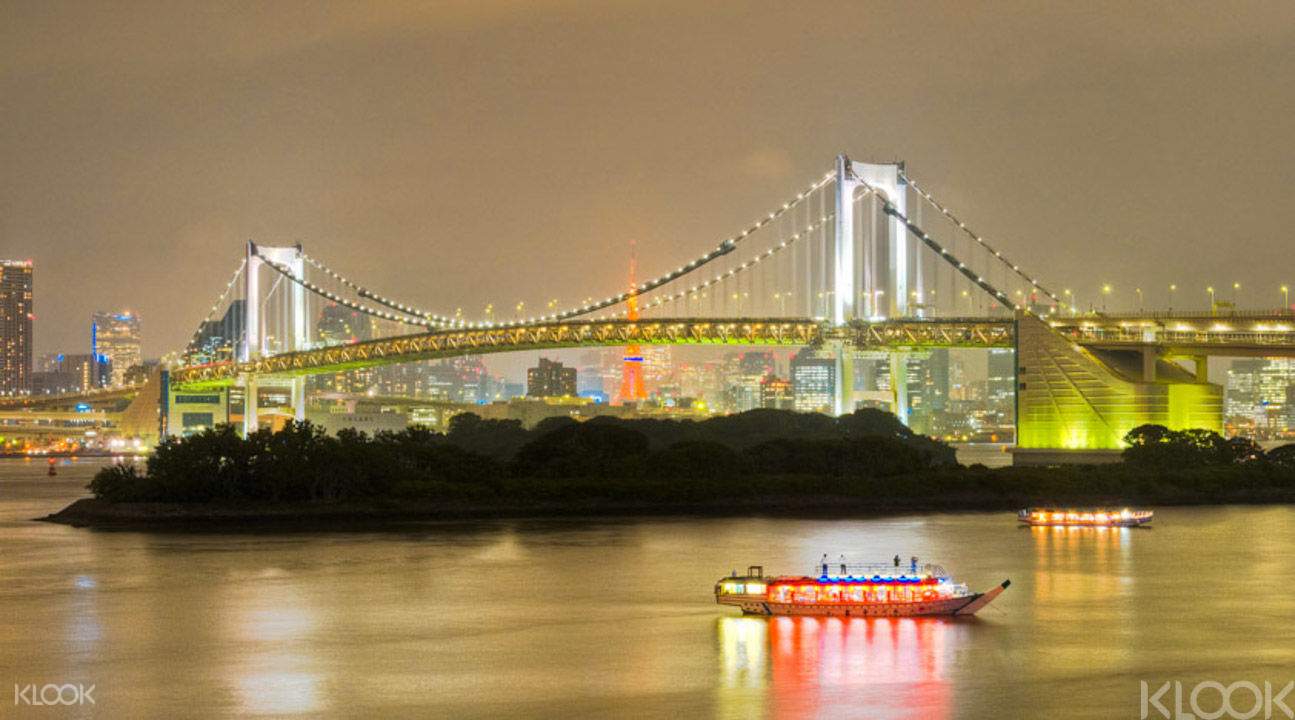 Enjoy a romantic full-course meal with your special someone amid the dazzling view of Tokyo Bay’s city lights. 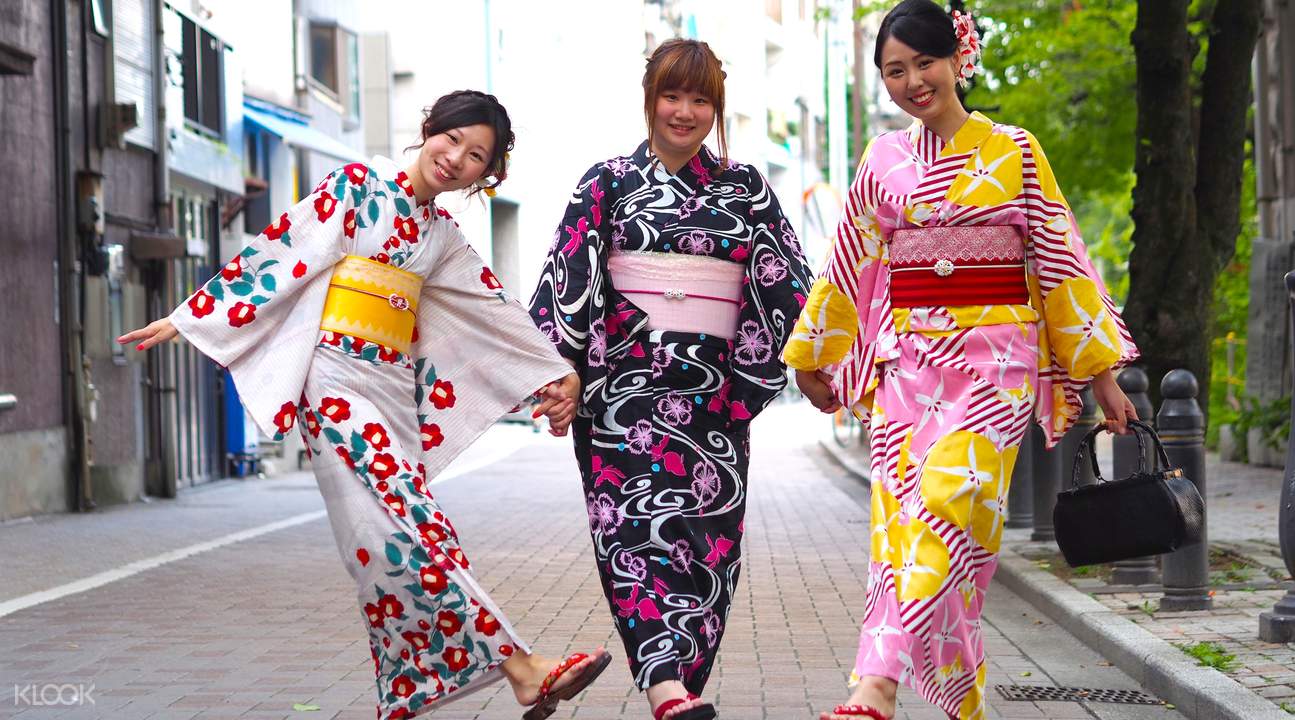 Explore the streets of Asakusa wearing the traditional kimono or yukata. You get to choose the design of your outfit and lend you footwear (and sometimes accessories too). They will also style your hair and let you choose the flower to adorn your locks. Ready your cameras! 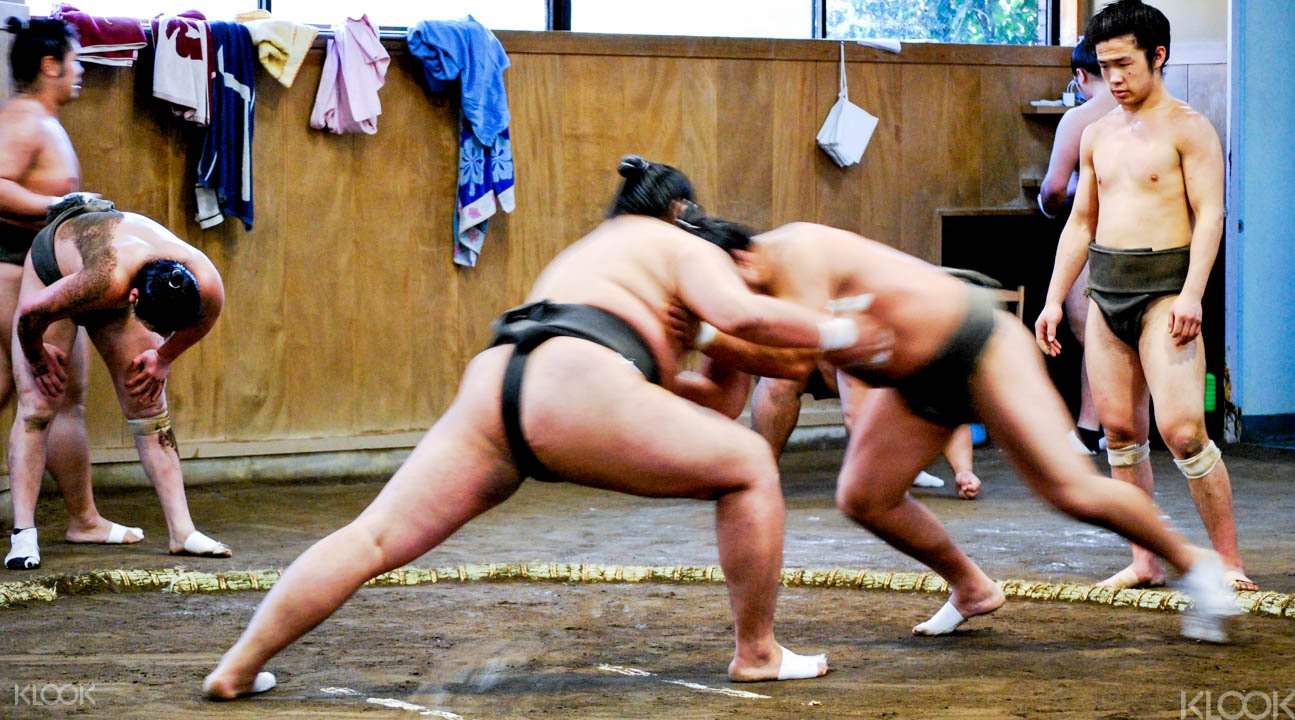 Learn more about this Japanese sport as you witness the wrestlers’ morning routines. Watch them practice and train for two hours. The tour can also be done in English for non-Japanese guests.